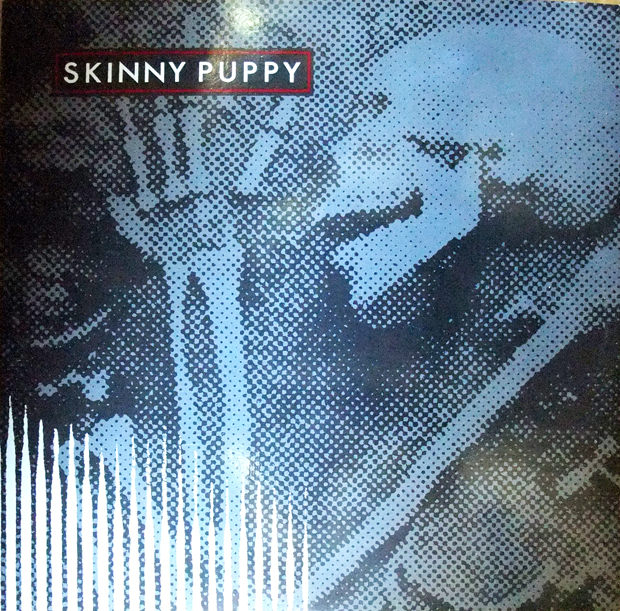 With Industrial influenced acts gaining popularity worldwide, it’s a humble reminder the genre was spawned in part right here in Canada. Skinny Puppy formed in 1982 in Vancouver, BC. The partnership of cEvin Key and Nivek Ogre evolved into one of the most influential groups in Electronic music. Their impact stems primarily from the vast number of bands they influenced. Nine Inch Nails was once their opening act, with Trent Reznor proclaiming them as heroes, and stating his first song “Down In It” is a copy of SP’s 1986 single “Dig It.”

cEvin worked at Safeway as the “check out guy” where Ogre spent his welfare cheques. The opportune meeting soon had them jamming with Dwayne Goettel on synth, cEvin on drum machines/synths, and Ogre making verbal noise. A concept song about life as seen through a dog’s eyes was a eureka moment, and Skinny Puppy was born. Ogre said “A dog has always represented to me the average person and what the average person goes through in his life.”

The 1984 debut EP Remission on Nettwerk Records is the core of their innovative sound, a crushing analogue combination of dark, distorted synths, bizarre horror movie samples, and growly, stream-of-consciousness, near indecipherable lyrics. It is a twisted experimental approach pioneered by bands like Throbbing Gristle, applied entirely to electronic music, described by the band as “audio sculpture.” The New Musical Express wrote “Like the best horror books and films, Skinny Puppy take one into one’s darkest dreams and never let up the pressure. The irony is the dream they are dealing with is the reality we experience every day we wake up.”

The EP was released numerous times with variants on the label, such as the first Canadian pressing pictured with the “skull and bones” label. It was later reissued on cassette and CD with bonus tracks.

Over the years, they became advocates for animal rights, and criticized pollution, deforestation, chemical warfare, drug addiction and more. Their gruesome and risky stage act combined performance art and video projection, with fake acts of bloodletting getting them hauled to jail. Imagine being the guy who had to clean off all the fake blood from the equipment! In 1989, their video for “Worlock” was banned from MTV as it spliced together violent clips from horror movies, the concept itself a critique on censorship in America.

Thought provoking, startling, raw, Remission is the ground breaking effort etching SP as the progenitors of dark Industrial anti-music, spawning countless side projects and solidifying their place in music history. Remission is essential listening for anyone interested in analogue production, clever-processing and the darker recesses of the mind. Skinny Puppy remains active and released a new album in 2013. Catch them on tour, and watch out for the rare vinyl in the bins at The Inner Sleeve record store.